I woke up the next morning feeling really dehydrated; I guess you can’t really get anything healthy from a Chinese take out, not even from the “Be healthy” page.

I loaded up the panniers, filled up on water and endured some more hotel breakfast before setting off on the 30 mile journey South West into Philadelphia.

Now of all the journeys, this day had to be the smoothest riding day I can remember possibly second to my travels in Ashland, VA but we’ll get to that in a few more days.

The roads were bike friendly, there weren’t too many climbs and once I was on the US130 it was just one road straight into my destination for the night.

Now I spoke about being on the wrong side of the tracks a few days ago, I was about to get firsthand experience.  Up until this point the ride was as smooth as you could imagine, considering I had MSG pumping through my veins from the take out the night before I was feeling pretty good on the bike.

Just the fact that it’s taken three paragraphs to negotiate NJ gives some indication into how smooth the ride was that day.  That was until I crossed the tracks…

Being an out-of-towner I took no notice when I cycled past the ‘Now entering Camden’ street sign, to me it was just another of the many cities I’d cycle through.  I should have known judging by the empty orange soda bottles and half eaten chicken wings on the sidewalks.

When you see half eaten chicken wings you know that person didn’t have time to fully enjoy it….that is when you know you’re in the wrong part of town. 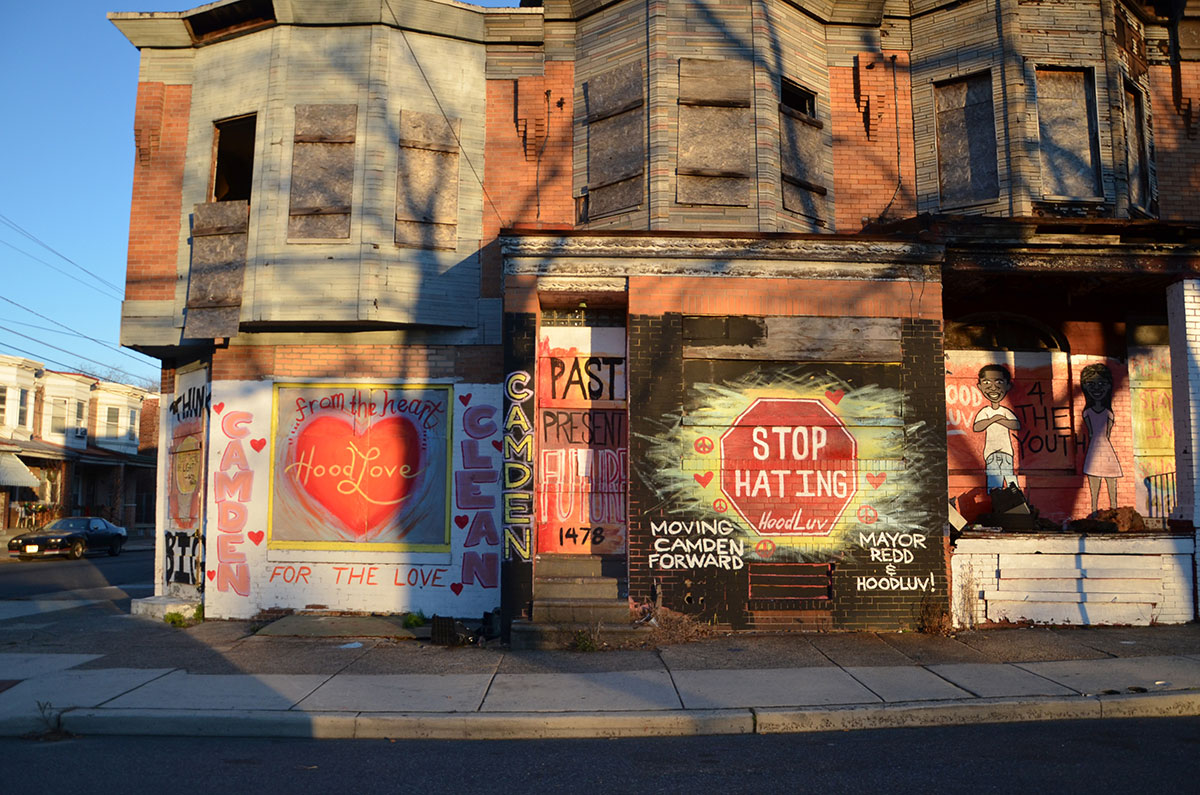 Little did I know I was in a town which just last year had a murder rate 10 times more than that of New York City.  Even scarier still; there was a murder on average every other day a month prior to me cycling through the town.

If I’d only known this information before hand I would probably have strapped 2 jet engines on Ursula and flown into Philly… maybe not but I would have given it some thought!

The way the infrastructure not to mention the demographic changed was astonishing.  Boarded up windows, pot in the air, houses with no roofs, cars without tyres, prostitutes pounding the streets in broad daylight, shoes hanging from telephone cables…

Every stereotype you could think of was there, it felt like I was in a movie set.  It was one of those places I knew I shouldn’t have been but did I slow down to think about it?  Not one bit….

Cycling down streets with no traffic on them, guys sat on their porches and they all stopped mid conversation to stare at me as I cycled past… man my heart was skipped more beats than an old record player.

It’s funny when I get nervous I throw on this really uncomfortable looking smile, every time I past a gang of guys on the sidewalk I made sure I was grinning from ear to ear just so I didn’t look like a threat… I must have looked crazy but it seemed to work.

At that point I decided to take my shirt off and ride topless, one because I was wearing my bright yellow t-shirt and knowing my luck it was probably a local gang colour and two; I wanted to show these guys that I wasn’t harbouring any gang tattoos.

So by now I was cycling without my shirt on with a massive smile on my face averaging maybe 17-19mph – not you’re every day sight.  Nearly every gang of guys on the sidewalk look like they were fixing to jump me so I ended up pretty much jumping every stop sign I (as safely as possible) could.

As I forked onto Federal Street I could see the Philadelphia skyline in the distance….”Yes nearly there!”  Before I could appreciate the view that’s when I heard it… 3 to 5 gun shots.

The shots were fired from the direction I just came from and sounded like they were maybe 0.4 miles away at most.  Fireworks maybe?  Man whatever it was I put on the after burners and hauled ass out of there.

Everyone I past was just walking casually as if nothing happened but I guess when you’re home city is labelled “2nd most dangerous city in the US” you expect such things to happen.

After putting Ursula through her paces a few hundred yards I started to slow down and pace myself, I was still averaging a modest 14/15mph.  That’s when I heard the sirens coming and when I say siren(s) I mean it!  I counted 9 police cars, 4 unmarked police cars (white Chargers) and 3 or 4 ambulances… yup they were definitely not fireworks back there.

I was cycling on the sidewalk now leaving the police to tear up the road.  For a good mile stretch an emergency vehicle would fly straight past me at around 80mph almost blowing my hanging shirt off my belt-line.  The situation made me wonder, what if I set off on my journey 5 minutes later than I did….?

When I got to Camden College things died down a bit and I started to slow down.  The college campus was surprisingly quite pleasant and the blocks where now populated with students and college security guards.

Nice modern décor, beautifully kept foliage… It all felt a little artificial to me, I looked at people on the sidewalk with smiles on their faces and wondered; do you know what’s just happened ‘on your doorstep?’

I felt safe now and all it took was a few more turns of the wheel.  It was a sobering thought and it really made me appreciate the term ‘wrong side of the tracks’ a whole lot more.

So I was now cycling through the campus and the only thing that stood between me and Philadelphia was one more bridge – The Benjamin Franklin Bridge.

The route I took led me to the wrong side of the road leading up to the bridge which was an interstate so I had to ask a security guard who gave me directions of how to get to the other side.

I had to back track through where I came from in order to get to the other side of the interstate to cross the bridge.  After what happened 20 minutes prior, I didn’t even want to look over my shoulder let alone turn the bike around.

I felt like that character in a horror movie, the ‘dumb blonde’ who turns around to see what the noise was instead of running like hell.

Half a mile and right side of the interstate later I was facing the last obstacle in my path a near 3000m bridge.  After the day’s events a bridge didn’t seem so bad to me after all it helped that I could see my finish line on the other side and the goal was insight.

As I approached the start of the bridge I put my shirt back on just in case it blew off into the water and I started the climb.  I was happy to be on the bridge getting out of this crazy place, what I was leaving was the police’s job to deal with now.