Rolling into New York the day after the torrential downpour of the previous 48 hours I knew I was going to be getting mucky.

The sidewalks and hard shoulders where covered in dirt and puddles of mud and the one thing I realised I had forgotten to get for my bike (whom at this point I decided to call Ursula) were mud guards.  I would have straight-line mud stains all over my back from where the back tyre would kick up the dirt from the puddles.

I’d be taking US 1 pretty much all the way in to New York and staying in a hotel on 34th and 9th just north of Chelsea in Manhattan.

I was supposed to be staying with my relative in New Rochelle, a town outside Manhattan on the coast about 20 miles south west of Stamford but unfortunately that fell through.

I was pretty frustrated because I wasn’t banking on staying in Manhattan overnight, the day was supposed to be a short ride into New York followed by a longer ride the following day straight in to New Jersey bypassing Manhattan.

I’m probably in the minority here but I’m not the greatest fan of New York City.  I’ve always been a country boy I like space, scenic backdrops and peace.

Most of all I don’t like the overwhelming sense of insignificance big cities like New York and London give you, it makes me feel like an ant in an anthill. 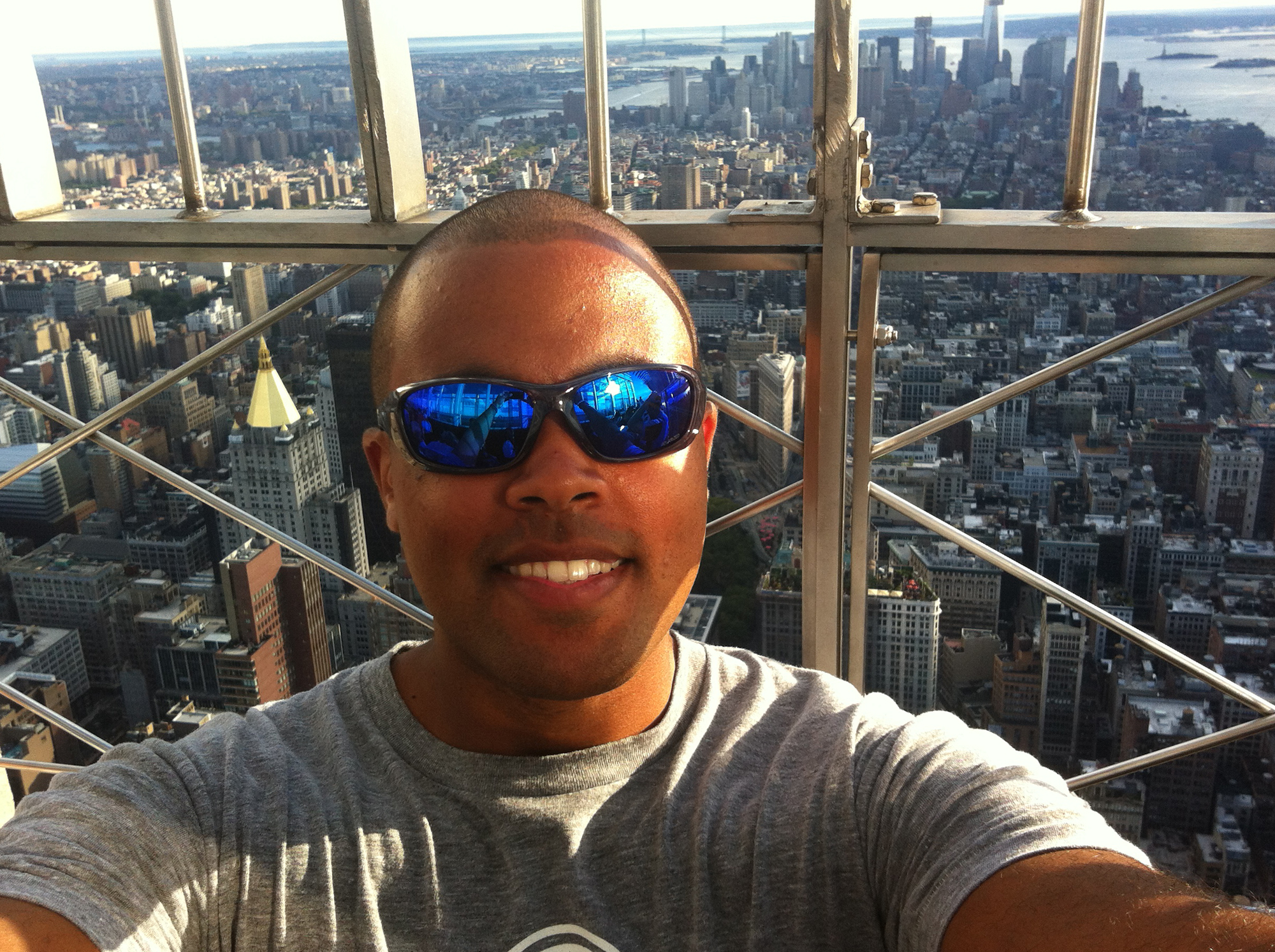 One hell of a burger

So I cycled into Manhattan that day and boy oh boy what a headache that was, my average speed was about 8mph due to having to round cars parked on the cycle lane, stop at red lights every block and dodge huge hordes of people on the sidewalk.

The whole journey felt like a game of dodge ball played in slow-mo… except for the part where I cycled through Harlem and pushed the fast forward button, I sure as hell wasn’t going to waste any time there that’s for sure.

I got to my hotel at about 3pm that Sunday afternoon and after nearly a week on the road without shaving I was starting to don a really good yeti costume for Halloween.

So I left Ursula in the hotel suite and took a walk into town looking for the nearest barbershop.  I found a great one a block down on the corner of 34th and 8th I got cut by a college student who was working part time at the barbershop to help fund his degree in medicine at college…admirable.

So he hooked me up with a new way overdue cut and after sharing my story I gave him a wristband and was on my way.  I had been to New York once before 4 years ago for thanksgiving with my Mum but we never got to do any sightseeing so after I grabbed a bit of lunch (at BRGR) I headed to the Empire State building.

That was the time I realised what I was really doing, I was in New York completely alone.  I hadn’t felt lonely a day in my life, I’d been through my freshman year at college living alone and felt fine…this was a totally new experience for me.

I’d always been a person content with my own company; content was a word I’d best use to describe myself but standing on top of the Empire state and looking out at the skyline… I realised right there and then just how big this anthill was.

It was a tough moment lining up to take a group shot on the 80th floor of the Empire state.

“One group shot?”  The photographer said as the Mexican family standing in line ahead of me posed in front of the hanging backdrop of New York.

“Yes sir and I don’t require a picture thank you.”

Later that night whilst sitting on the end of my bed, watching terrible TV, shuffling my fingers and swinging my legs I could hear it building up around me… the New York night life waking up outside.

My back was still not great partly due to the many hours of sitting rigid on the bike and the constant change of mattress over the past few days.  With AS and my case in particular, when something’s fixing to happen I do something to take my mind off it like run or go to the gym and work out.

I know I shouldn’t but I wasted so many years giving in to this thing, I let it walk all over me for nearly a decade.  Since my diagnosis in 2009 whenever I feel a fight coming on I face it dead on, I walk in front of its path.  Call it pride call it stupidity something takes over me and I feel that I need to shock it out of my system.

Tonight I could feel a nervous breakdown coming along, I was serious, THIS was serious.  I wasn’t banking on being in Manhattan alone that night; it was a last minute rain check after the rain the day before.

I did what I normally did in situations like this, I had a shower, put on my evening wear and headed into town, destination unknown, shock the system.  I had a few drinks at a bar down in Chelsea, watched the football and strolled onto the next place.

It was great I had no idea where I was going, the alcohol was numbing the pain in my back and legs and I didn’t feel lonely anymore… I didn’t feel anything.

I walked around from bar to bar, club to club sharing my story with anyone who wanted to hear it… how it came out a few beers later is a different matter.  I can’t remember what time it was when I decided to call it a night, I stopped in at a Subway near the hotel and ordered myself a cheese and meatball sub.

As I stood there ordering my fillers I caught the eye of my reflection in the cough guard… Just like 8 months ago after running home pent up with emotion the night before iamONE was born, there it was, that same smile; the same “You crazy bastard smile.”

Anyone who knows me, truly knows me, knows that I’m not the going out sort of guy.  The odd bar where we can have a beer and share conversation yes but going clubbing, completely alone in Manhattan?  Haha…No I don’t recognise that person.

But it seemed to get me out of my funk that night.  When times get tough or you feel confused and perplexed, I like to throw myself into an alien situation, you can sink or you can swim either way you’ll learn something new about yourself.

If you swim that lesson you learn may be the most valuable lesson you’ll ever learn.

Make mine a foot long

That night I sat on the end of my bed, eating my Subway sandwich, gazing out of the window at the Manhattan skyline very Carrie Bradshawesque… minus the cigarettes and crows-feet.

That’s when it hit me, ‘iamONE.’   I am one person; I have one goal, one dream and one message.  This journey is about showing what one person with one journey and one message can achieve for the greater good.

As I gazed outside that window at the thousands of people scattering about their business I realised that yes I do feel insignificant and alone right now but the feelings were natural.

I went to bed that night feeling a little better but knowing that I would be hauling ass straight out of NYC come daybreak.  The next morning I woke up… the beer from the night before pressed the snooze button for me on a few occasions and ‘daybreak’ soon became 11am.

I reserved my hotel in New Jersey, planned out my route, loaded up the panniers, showered and headed out.

It was a hot busy Monday morning and I felt good for the first time in a long while so I decided to go check out Central Park before heading south.  Central Park for anyone who hasn’t been is the perfect getaway for anyone like me who wants to escape the hustle and bustle of the city.

I spent a good 2 hours there unwinding and preparing myself for the ride into New Jersey.

It was a great afternoon that day, I had the longest sleep I’d had in a while, had finally seen Central Park and I had discovered another meaning to iamONE.

Nothing changed that day, I was still alone, but I understood more about why I was here and what this journey was all about.  It was out with the old worries and into New Jersey.