I woke up the next day after grabbing a few minutes sleep here and there, the last thing I wanted to do was check my phone for directions that day.

I was actually more tempted to ask the concierge if he could book me a taxi to the closest airport so I could get back to Boston.  I felt like I was done riding. I was done riding solo. Done having to have an hour long shower after every gruelling ride to loosen my back muscles.

They weren’t even nice showers the heads were always set too low so I had to crouch underneath them with bad posture completely contradicting the point of the soothing hot shower in the first place.

I didn’t know what to do with myself, after having breakfast I came back to the room and spoke to Mum on the phone.

She asked me why I was pacing around the room; I guess she could hear the restlessness in my voice.  I told her I didn’t know I just was.  Truth is I was lonely and having a serious case of cabin fever.

Sure I was in a different town and hotel every night but if you look at the average run of the mill hotel suite they are all fundamentally the same. Same layout, same soaps, same curtains, same AC system.  It felt like I was going somewhere without really going anywhere.

I lay on my bed looking at the stains on the ceiling…gross. I felt empty of feelings and drained of energy.  Just as the idea of looking up directions to the closest airport came to mind a picture popped up on my phone.

While in Upton I met a great lady called Renee who was an elementary school teacher.  We had lunch together one day and I told her why I was in town and what I’d be doing over the next few weeks.

She said, “Funny you should mention that, my 2nd graders just asked me during a geography lesson how long would it to take to cycle from here down to the south!” The coincidence was uncanny, so since then I told her that I would text her everyday and check in with my location and the kids would put a gold star on the map in class of where I was. 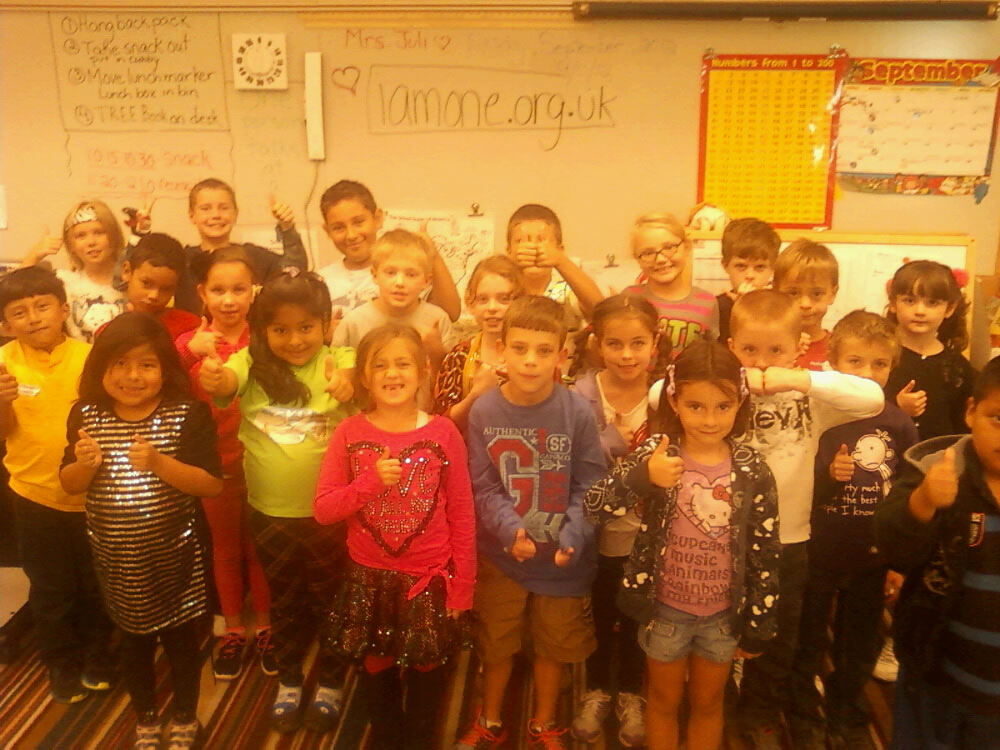 I had asked her to take a picture of the class and send it to me.  The picture couldn’t have come through at a better time than that day, hour, minute or second.

I lay there on the bed looking at this picture of these 2nd graders with their thumbs in the air and their big smiles all missing at least a tooth each….Cute.

They were so full of excitement and adventure just like my Twitter and Facebook followers.  At that point I logged into my social profiles to see the many messages from my AS ‘warriors’ getting strength from what I was doing.

Some were going to the gym after reading my activities others were starting their own blogs. I didn’t want to let them down; what I was doing was food for some of these people.

Just like that I was out of my funk if only temporarily and back on the saddle, 100 miles south to Raleigh North Carolina.  I didn’t know what I was getting myself into…100 miles in a day for me was absurd.

I cramped up badly after 25 miles and the 70 mile journey in Connecticut, well let’s just say I was still feeling the effects of that in DC.

But I was on the road now; I had packed and prepped Ursula as quickly as I could before I could change my mind.  I was out of Virginia on the 301 and then took Moore’s Ferry road into North Carolina.

It was one of the loneliest rides I’ve ever been on; there was nothing around but trees, farmland and my shadow. If it wasn’t for my dysfunctional state of mind keeping my mind active I think I would have gone crazy.

It wasn’t until I reached the 401 coming off the 561 that the views started to become a bit more scenic and exciting…..well just about. I got into my stay in Raleigh around 5pm.  I checked in for an extra night to recover from my first 100mile ride.

I did my usual laundry and showering and walked over to Crabtree Valley mall across the street for some food.  As I sat there in the food court totally alone eating my first taste of NC BBQ I looked around the vast food court at the hundreds of families and friends laughing and enjoying each other’s company.

I felt like they were all watching me wondering ‘why is that man eating alone?’  I’d never felt like this before, I finished my food as quickly as I could and left for my hotel room to take my NSAID.  I hung out that night doing nothing but watch TV and cut my toenails…man this was getting boring and slightly perturbing.

I had to keep reminding myself why I was here and what I wanted to achieve.  I knew that I needed that extra day to rest my body because I felt the day’s journey taking its toll on my back.

I contacted my buddy Mark later that night to let him know I was in the area.  He was a friend I knew who lived in Charlotte NC a city 170 miles west of Raleigh.

It was way off my route south so I decided to give Ursula a rest in the trunk of a rental car.  I always said that if I was in NC no matter what part I would come and see what Charlotte was all about.

So after I spent another day with my feet up in my hotel room in Raleigh I got a rental car, locked and loaded and headed west to Charlotte.  It was great timing because I had already organised lunch with Dennis and Debbie in Durham, two great people who worked with the East Coast Greenway Alliance.

So I got in to Durham that afternoon and met Dennis and Debbie for a great lunch at Babbaganush.

After telling my story of the ride so far and giving my 2 cents of the ECG route they gave me a courtesy biking top (so cool) and I was on my way.  I liked Dennis and Debbie they were great people working for an even greater cause.

Mark was cool too, a big sports fan and big BBQ eater like me.  I got into Charlotte a little before rush hour and checked into my hotel.

Before I could drop my bags in my room Mark was on the phone telling me to get ready he was taking me to his softball game.  It was cool, we went out for hamburgers and beer afterwards, caught up and called it a night we both had had long days.

I used the following day to plan out my route back to the east coast.  I had to drop my rental car in Fayetteville NC and cycle to Wilmington NC my next stop.

Once that was planned and my next hotel was booked I showered changed and headed out to meet Mark for dinner at a place he had talked up to be one of the best places in Charlotte.

Just the fact that he told me not to drive told me what kind of night it was going to be. I met him at the train station and we headed into town to eat a seafood joint called Vinnie’s.

10 beers, one platter of raw oysters and a seafood platter later we decided to head back to the station. I knew I had too much to drink because when I get drunk I feel like running a marathon, I get this second wind from somewhere.

We said our goodbyes at the station he walked home and I ran back to the hotel… Yup I was drunk.  But that night did wonders for me, I needed a familiar face, I needed to laugh and share something with somebody.

I went to bed in a spinning hotel suite, never a good sign.  The next morning I woke up with a pounding head, a mouth like sandpaper and the room still spinning.  It was 6am when I walked downstairs for breakfast still in last night’s clothes…classy.

After guzzling down half a dozen pints of water and tucking into a stack of waffles I went back to bed and slept for a few more hours before heading to Fayetteville to drop the car.

I was thankful that I was driving that morning and not cycling just yet, I would have chundered over the handle bars for sure, classy.