I was staying in Upton Massachusetts for 2 weeks prior to starting the bike ride. Upton is a beautiful place; peaceful, scenic and one of those places where everybody knows your name or at best your face.

I used the first 2 weeks to settle into the life and get my body clock in sync with US Eastern Time. I was using a rental car to get around for the first fortnight, picking up little bits and bobs for the road, spare tubes and repair kits not to mention the bike itself from Giant Cycling world Boston.

I was feeling good, feeling positive but was sad to be leaving Upton, it was fast becoming my home away from home I loved the area. When it came time to dropping my rental car back at Boston Logan International I loaded up the car with my bike and necessities and made the 40 minute drive into Boston.

That’s when it dawned on me, after this drive it’ll be just 2 wheels for here on out. 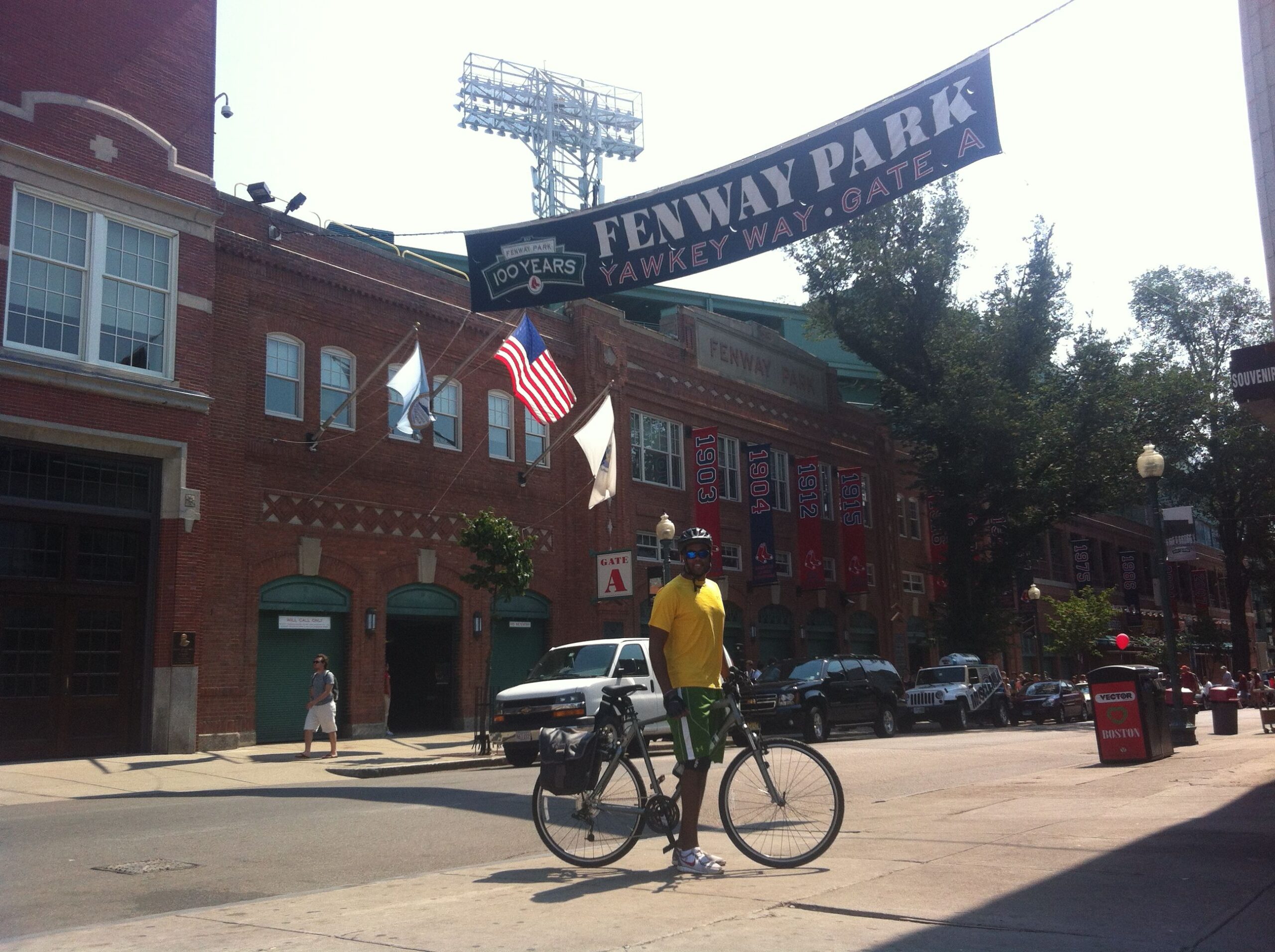 I delivered the car back to the rental place and fixed my bike up, attached the tyre back that I had taken off to allow the bike to fit in the trunk and I was off.  I had to go across town back to Giant Cycling world because over the past fortnight I had yet to find any panniers that I thought were right for me.

Once I got there I met back up with Seth Samson who I had been liaising with all year about what I was doing and who also hooked me up with my bike and gear.  Bob, his colleague showed me the panniers he thought would be a good match for me.

It hit me as I looked into the narrow and modestly deep dual carrier that this was all I had to live out of for the next few weeks.  It was all creeping up on me, reality’s shadow…

Is it left or right?

After talking to Bob and Seth and getting last minute tips I loaded my new panniers onto my bike and left the shop.  I never actually thought about where I was officially going to start the journey from until I looked down the street from the bike store and saw THE big green monster of Fenway Park, home of my beloved Boston Red Sox…. Perfect!

I headed over there and stood in front of one of the many hot dog stands just outside the ballpark man they smelt so good!  I asked a local guy to take my picture in front of the ballpark; this was it, my start line.

After shooting the shit and bemoaning the lackluster season the Sox were having with my new photographer friend I headed west back to Upton Massachusetts.  The city was buzzing that Friday afternoon with freshmen going to college, I don’t know how many suitcases and parents I dodged that ride out of town but it was a lot!

I got to the bike route running parallel to the Charles River and got to just about outside one of the Harvard buildings when I lost all focus on my route.  I was following a cue sheet which had turn by turn instructions.  I was never good at that even from my days as a boy scout, I am much better visually I can memorise maps and keep the turns in my head like a mental picture.

So after stopping for the nth time in what must have been 90+ heat I said look…let me just get my iPhone out and map this route out, I was done with the cue sheets.

So I did just that, I set my address point and set the mode to walking and followed that route.  It wasn’t a bad ride but it dawned to me just how long it can take to cover a mile when you are unaware of the exact route so that was lesson number one….know the route first and foremost.

The journey took me about 5 hours partly due to me getting lost leaving Boston and me getting used to my new bike.  There was no better feeling than getting back to familiar territory in Upton because you can gauge how long you have left of the journey knowing what street leads where.

I was thankful that I increased the volume of my leg training before I left for the USA because the additional power really did help on those rough climbs.

Where every body knows your name

I got back to Upton in the evening and chilled out at Red Rock Bar and Grill, a place where everyone certainly knew your name.

I spent the next few days taking it easy and planning out my journey into Connecticut.  I remember the day before I was fixing to leave we had a party down at the bar, BBQ, beer, volleyball, the works.  I was feeling good so joined in on the volleyball tournament.

30 minutes in and I was on the floor in agony, my back seized up and I could barely move.  Life with AS is not fun, one minute you’re feeling invincible and the next you can’t reach around to scratch your ass.

The next morning I made the very late call to postpone the ride south until the following day so I used that day to rest up and make sure the nerves in my back were completely free.

The day I left for Connecticut was when the doo-doo hit the fan.  By the time I’d packed 2 outfits, my delicates and my iPad my panniers were spilling out over the top. I thought OK, let’s try out this minimalist thing for a few weeks I’m sure ill survive.

So I said my goodbyes and left the last familiar road behind and headed south west to Connecticut.  It was scary realising that from that moment on, I’d be alone for the next 5 weeks.

I wasn’t going to arrive back in a familiar town that evening. It was just going to be me, my bike and my motel.

From that moment on out I was riding solo…