It’s interesting how I well I remember the first few turns I made that Wednesday morning leaving the last familiar road on the way to the Massachusetts/Connecticut state line.  Right, left bend then another right… I can almost smell the morning dew from that day now.

The ground was wet from the downpour through the previous night and I remember thinking “damn I’m not carrying much in my panniers but it’s really dragging me back.”  It was the first time cycling with any luggage so I guess it took a while to get used to it.

I remember turning in to Douglas state park, a state park stretching about 6 miles and leading right into East Connecticut.  Looking at it on the map I thought ok it’s a 6 mile straight stretch through Greenland… a relatively easy way to eat up some miles…

As I turned onto the path I realized that it wasn’t going to be as simple as I thought.  If you go to Brighton beach down on the south coast of England and try cycling on those pebbles that’s what it was like pretty much for 5.5 of the 6 mile stretch.  What made it worse was that there was not another sole there just swamp on the right and a 20 foot drop to no-man’s-land on the other.

If my tyres could speak to me they’d be yelling at me… it justified me buying a hybrid with tyres durable enough to handle such terrain.  Man I was so scared I think I only stopped once and that was to let a turtle cross my path!

That was probably the longest 6 miles I’ve ever endured but when I got out of the park I was greeted with a ‘State of Connecticut’ sign… gratification.  From there onwards to my hotel in Brooklyn CT, the ride was incredible.  East Connecticut is beautiful, farmland, wild chicken, awesome homes with picket-fenced yards, it was a great ride.

Turning the corner to see my motel for the night was ecstasy…there was no better feeling and it was one I’d never take for granted! 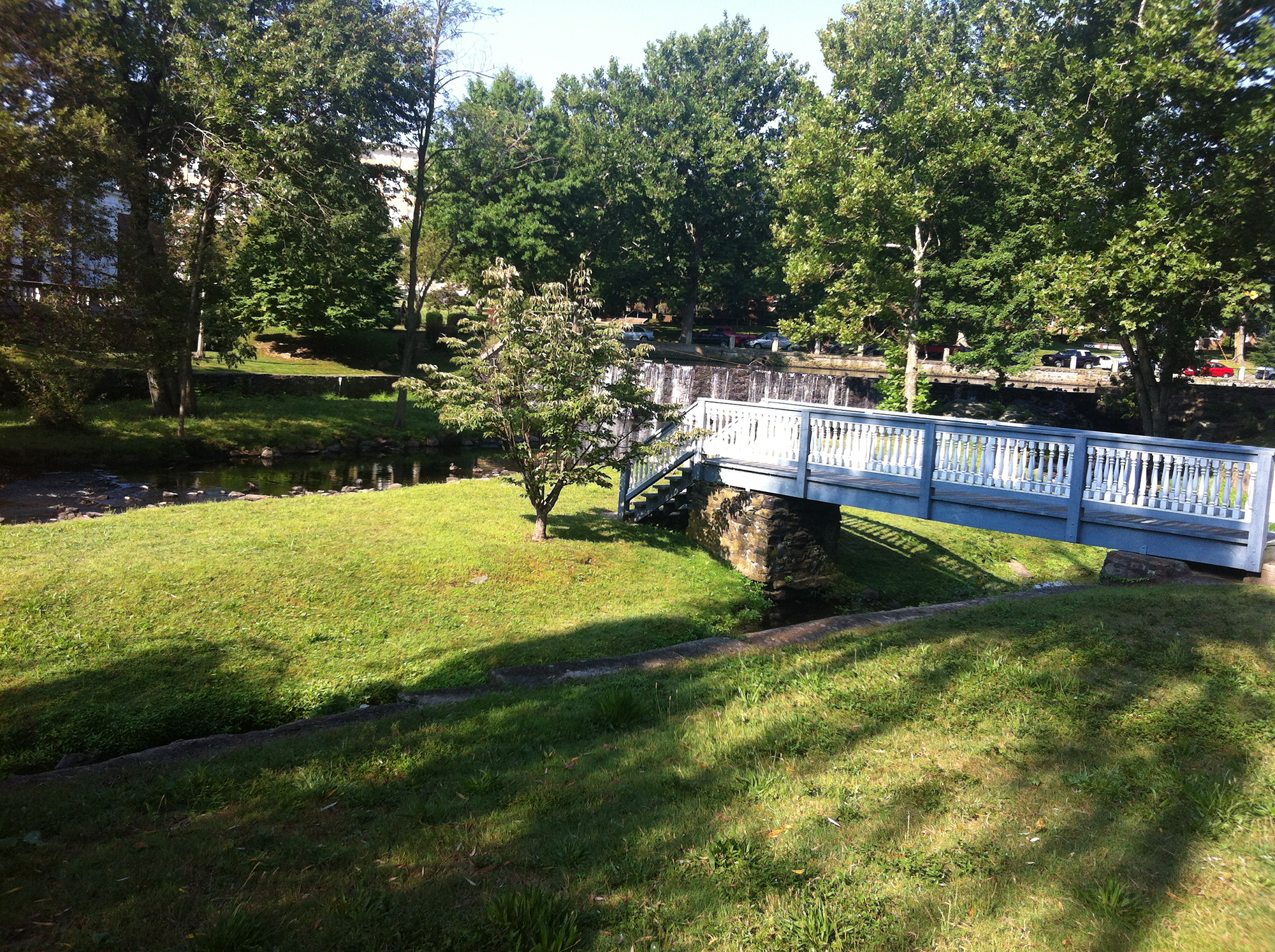 I stayed in motels, nothing fancy.  I made sure it had Wi-Fi, cable TV and free breakfast – I think that day I checked in at Americas Best Value Inn.  As soon as I’d check in I would throw off my Lycra and wash all my delicates in the basin before hanging them up to dry for the next day above the AC machine.

Then I’d jump in the shower and stretch my back out under the hot water.  It’s amazing how much sand and grit gets in all sorts of nooks and crannies!  That night I ordered pizza, watched a little TV and updated my blog before calling it a night.

The next morning I woke up to realize that I had not even planned my journey or accommodation for the following day.  So I recalled that I had a friend on twitter who resided in Connecticut, I messaged him and found out that he happened to live in New Haven, a city 70 miles in the direction I was heading.

Within the hour I was invited to stay for the night and have dinner – his name was Haywood Lawrence.  After I had breakfast, stale cereal with room temperature milk and warm orange juice I made tracks to Haywood’s house in New Haven.

I wasn’t prepared for that journey, not by a long shot and even after completing the journey to Miami, nothing comes close to the ride I endured that day.

My back was a little twitchy that morning due to taking my medication a bit later than desired the night before so I wasn’t able to push it at full speed.  I left around 10am and it was pretty much major road riding until I hit the suburbs.

Man I don’t know how many bugs I ate that day, they seemed to all want to give me dental checks.  Luckily I was wearing my WileyX Gravity sunglasses for protection to keep the little kamikaze buggers out of my eyes.  The first few miles were a blast because after coming off the major road the suburbs were quiet and all downhill so I was reaching speeds of 36 to 37mph… it was awesome!

But the fun didn’t last… for the next 60 miles or so it was all major roads, steep uphill climbs followed by gradual descents – couple that with relentless headwind and it was horrible.  It was torture on the mind too because you’d see a downhill stretch and before you could enjoy the short rest period you were climbing hills twice as far.

It was around this time that my legs really started to seize up and after 35 miles I had to stop at CVS to get some fluid and sugar in me.  That was the day I really discovered how tough this was going to be and I was really finding out what I was made of.

A little after my pit stop at CVS the surface flattened out as I got into the city.  It was amazing seeing all different types of road kill on the hard shoulder… Man squirrels in Connecticut really need to learn how to cross the road and climb trees!

There was nothing worse than checking my phone for directions whilst cycling and accidentally rolling over some road kill and hearing a crunch… gross!

When I finally approached New Haven I started to understand the term “wrong side of the tracks.”  I’d gone from the peaceful and tranquil farmland to ghetto in one turn.  The smell of horse manure in the air quickly dispersed and was replaced by the smell of pot.

I found New Haven to be an interesting place, there would be the black neighbourhood, followed by the Latino neighbourhood then in the middle of it all was Yale University, an Ivy League college.  Luckily for me Haywood lived on the other side of Yale from the direction I was coming from.

It was strange meeting him, after talking online for months and trading stories of AS over twitter for so long we were finally able to meet face to face.  He and his lovely family took me in and fed me, gave me a bedroom, use of the laundry and bathroom.

It felt especially good to shower the grit off my body that day.  I got there around 6:35pm; I’d been on the road for 8 hours and 35 minutes.  Shortly after taking a shower I could feel my back beginning to seize up.

With AS and my case specifically I know when trouble’s knocking on the door.

Sometimes exercise can eliminate pain for a few days but other times after exercise you can feel the adrenaline and testosterone build up mask the underlining pain and you know that in a few hours that pain is going to make its presence known.

So after chilling out for a while I sat down with Haywood to watch the Yankees play and talk about our conditions and diagnosis stories, it was good to have company if only for a few hours.

I went to bed at 10pm that night but not before I planned the journey into Stamford Connecticut the day after.

The next morning Haywood woke me up around 6:30 to tell me that the family needed to be heading to work and school so I had to get up and make tracks.  I was travelling 40 miles to my next stop which was the Holiday inn in Stamford.

I don’t remember much from that day other than being extremely tired from the day before and getting lost on a few occasions because of it!  But that day was the hottest day whilst cycling for sure.

It was 96 Fahrenheit that day and I was already tired and dehydrated from the night before whilst riding on the cusp of a flare up… I could feel one brewing.  So I stopped at the next CVS I could find and loaded up on water and Gatorade, I filled my bottle up outside on the sidewalk and sat in the shade by the door to try and wake myself up mentally.

I could have stayed on that curb all day if it wasn’t for the drunk, toothless, bra-less 60-something year old lady asking me if “I wanted a good time…”  Just like that I was on my bike… gone quicker than Usain Bolt’s bend on the 200 metre sprint.

The rest of the ride wasn’t too clear but I remember it being mainly through suburbs and back roads which made for a nice change.  It’s funny as you get nearer to a destination the time starts to go slower and the miles seem longer so as I approached my hotel I started getting more and more frustrated due to hunger and tiredness.

As I turned the corner onto the last street there it was, my hotel shining bright like an oasis… Never has a Holiday Inn looked so good.

Actually that hotel suite was my favourite throughout my whole journey, it was clean, big, and new and the bed was super comfortable.  I remember putting my bike up against the wall next to the bathroom and looking in the mirror.

I had sand and grit all over my face and the back of my t-shirt was completely drenched in sweat.  My body was exerting fluid I didn’t even have, so I after a shower I walked down to the store and loaded up on water and came back to my room and drank as much as I could.

It was about evening time now so after demolishing a Chinese takeout I decided to have an early night and hope that the comfortable bed along with my tiredness would take care of the flare up that was slowly building.

The next morning I woke up to the news that New York City was under tornado watch…great just my luck but looking back on it, it was probably a blessing in disguise…

Mother nature was throwing me a bone after throwing head wind at me the day before.  I got out of bed with my back feeling as rusty as a nail and legs screaming at me.

I walked over to the bathroom to throw some cold water over my face when I glanced over at my bike to notice that my odometer had reset.  Man I was so pissed off that morning and cranky that I decided to extend my stay another night.  I needed that extra day to get out of this funk.

That day I did nothing but get some food and watch daytime TV… I needed the rest day after cycling 140 miles over 3 days without rest.  I needed to prepare myself physically to be able to go on with the journey.

But I wasn’t prepared for what was to follow; from that day forward my journey would become just as much spiritual as it would be physical.  It was an emotional roller coaster leading right into the concrete jungle of New York City.